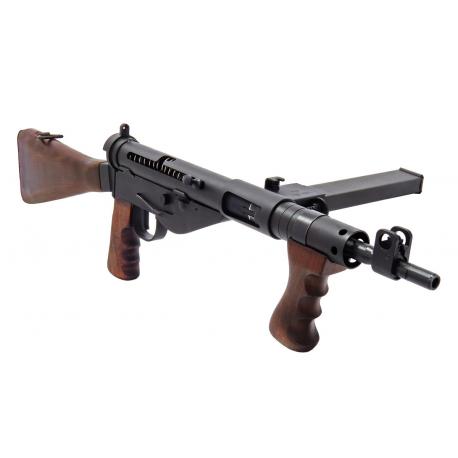 By buying this product you can collect up to 48 points . Your cart will total 48 points that can be converted into a voucher of 12,00 € .

The STEN is a British submachine gun from the 1940s.

It marked the collective imagination with its characteristic shape due to the loader in the lateral position.

Its rusticity, its easy handling and its parachuting to resistance movements at the end of the conflict made it the symbol of the armed struggle of the European Resistance during the Second World War.

The MK5 version is the most elaborate and has been optimized compared to the MK2 thanks in particular to front and rear grips and a wooden stock which makes the weapon solid and easier to handle.

It is characterized above all by its simplicity of operation, with a non-chocked impactful yoke, and its manufacture by stamping which allows rapid mass production at low cost.

It is also much lighter than the other submachine guns of the time (2.95 kg empty against 3.97 for the German MP40).

Its name comes from the association of the initials of its inventors (Reginald V. Shepherd and Harold Turpin), to which are added the letters EN designating the royal arsenal of Enfield.

Simple to use, easy to produce and inexpensive, the Sten was manufactured, in its various versions, to nearly four million copies between 1941 and 1945 by British arsenals and private companies, just like the Birmingham Small Arms Company Limited or BSA, the Singer Manufacturing Company of Clydebank, Canadian and New Zealand.

It was also used by the French army at the start of the Indochina War.

Reproduced as an Airsoft replica by NorthEast: the Sten MK5 GBBR.

A realistic reproduction and a great first on the airsoft market of the MK5 in GBBR.

This replica will seduce you with its weight, its real size but also its recoil with each shot.

Small feature for the storage of your replica:

Thanks to a system of rotation of the magazine body and the stock which can be removed quickly, you will be able to put away and store your replica easily.

This replica has the following characteristics:

Another superb replica that will delight purists of the World War Two.