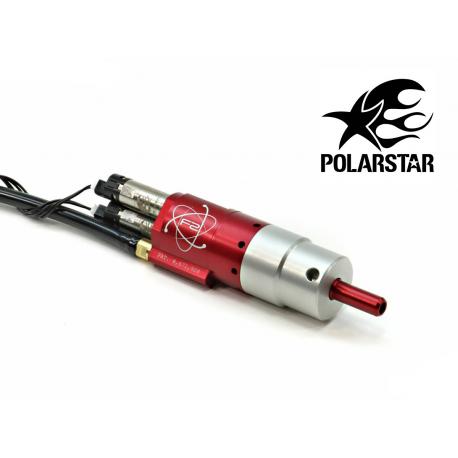 By buying this product you can collect up to 44 points . Your cart will total 44 points that can be converted into a voucher of 11,00 € .

What is the F2 from Polarstar? Well it is a system similar to the Fusion Engine but in Mini version, the big difference is that everything is done to be housed in the location of the cylinder of your Gearbox.

And its performance is the same as for the Fusion Engine.

As in the Fusion Engine system, the nozzle moves back thanks to the compressed air and it is pushed forward via a return spring which guarantees optimal and regular operation.

Due to its design the F2 can operate from 45psi to 145 psi which makes it possible to play just as well for the CQB as for the counter sniper in DMR mode.

In addition, its nozzle is biased by a forward spring which provides a consistent load force regardless of the operating pressure.

It shares the same spring as the Fusion Engine™ with light and strong spring options available to adjust the loading force.

The system for TM and Cyma M14 is only in semi Auto.


The F2 ™ allows easy speed adjustment by simply changing the inlet pressure and does not require a different nozzle to reach its full speed range.


The maximum cyclic speed of the F2 ™ is affected by several factors such as the operating pressure as well as the quality of the magazine and the BBs used.

However, 30 bbs per second are achievable in most standard configurations.

The standard Poppet valve F2™ is equivalent to the low flow red Poppet of the Fusion Engine™.

However, this valve responds faster and requires less air volume to operate, so the F2™ is able to achieve greater air efficiency than even a finely tuned Fusion Engine™.

Contents of the box:

F2 HPA air system (depending on the model chosen)

Electric cable (depending on the model chosen)

Switchboard (depending on the model chosen)

2 other products in the same category: