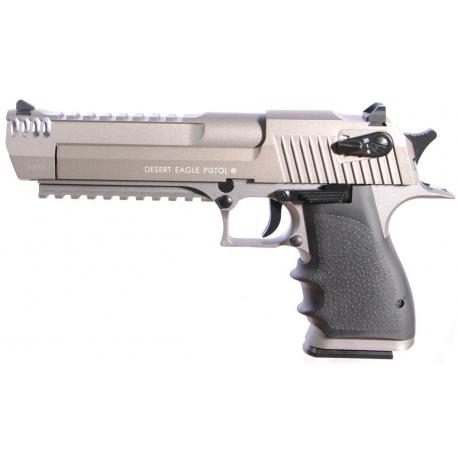 By buying this product you can collect up to 14 points . Your cart will total 14 points that can be converted into a voucher of 3,50 € .

Replica of the Desert Eagle L6 .50AE manufactured by KWC for Cybergun.

For the little story :

Pistol designed in the 1980s via Magnum Research USA and by Israel Military Industries, in Israel.

At the beginning their production was entrusted to IMI, in Israel, for the versions Mk I and Mk VII.

Again in Israel until 2009, then the Desert Eagle is produced again in the United States.

Loved by sports shooters for being able to be chambered in the .357 Magnum, .44 Magnum, and .50 Action Express calibers, its firepower has earned it a certain notoriety in cinema and video games.

This Desert Eagle .50AE pistol is a semi automatic.

The Airsoft version is functional in Semi Automatic and Full Automatic.

It is powered by a Co2 capsule.

It exists in 3 version, two-tone , Silver and Black.

This magnificent replica of airsoft weighs only 1100 g for a length of 270mm.

Its magazine allows the carrying of 27 of 6 mm bbs.

Thanks to its responsiveness in Full Automatic, the L6 will be more than enough to scare your opponents, whether outdoors or in CQB.

This model is particular with its 2 picatinny rails, one on the upper of the slide and the other on the lower body allowing the carrying of Micro Dot Sight, Laser, Tactical lamp ....

With an impressive perspective, this replica will find its audience.