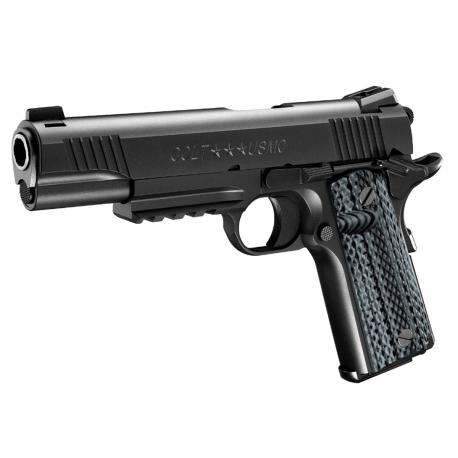 By buying this product you can collect up to 16 points . Your cart will total 16 points that can be converted into a voucher of 4,00 € .

Last out in the range of Colt, here is the M45A1 signed Marui.

In the early 2000s, the US Marine Corps adopted a new pistol replacing the MEU pistol.

This is the "M45A1 CQB pistol" on which the company Colt worked.


Each machined part of this custom gun is researched with high machining precision.

A new rail frame is integrated into the body and a grip G10 material laminated grip but also a wider serration is adopted for the breech.

In addition, it is an appropriate model to succeed the MEU gun, giving it the final touch for outdoor use with a beige color.

In the "M45A1 CQB gun" gas pistol, the internal mechanism is also upgraded while respecting the characteristic appearance and reproducibility of the texture.
Compared to conventional gas blowback model government, we improved the recoil shock and exploited its stability.


Body color adapted to modern equipment:
the chosen color, assuming a battle in the urban zone, such as big city, is adopted for each part, including breech and lower body.
The same colors as the real are reproduced.

Lower picatinny rail: For the lower rail integrated into the body, this allows you to carry a laser flash lamp etc ... Accessory compatible with standard Picatinny (width 20 mm) that can be installed.


Upgrading of the internal mechanism: improvement of the shock recoil with gas consumption equivalent to the classic government model by improving the gas delivery system.

In addition, by adopting the new type of shorter recoil system, the operating stability is improved.


Metal Notch / Spacer: The metal parts inside the bolt load snap together when sliding in the open position, to prevent the bolt stop and notch portion from being scuffed or damaged.


Cast iron magazine: can accept 25 bbs is included the magazine base being modified compare to the other 1911 magazine, this thin die-cast charger is cold-resistant.


(Note: the other 1911 and MEU magazine of their brand are compatible)