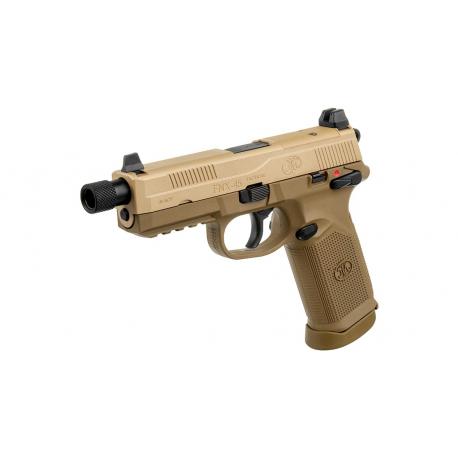 By buying this product you can collect up to 17 points . Your cart will total 17 points that can be converted into a voucher of 4,25 € .

The FNX-45 was a pistol originally designed for the service pistol requested by the US Special Operations Command (USSOCOM).

The iteration delivered at first was the "FNP-45" which was later dubbed the FNX-45.

Features included a pistol capable of accepting RMR type sighting optics, a threaded barrel for installing a silencer, high sights for passing over the silencer and chambered in .45ACP.

Although the military never adopted the pistol, the FNX-45 was the start of a new generation of pistols which now dominate the current handgun market and popularized many of the features mentioned above such as now "industry standard" when it comes to high end handguns.

This version of TOKYO MARUI was a surprise announcement for many Marui fans.

The pistol has all the same functions as the real firearm and is even ready for the installation of an optic out of the box. (compatible with Tokyo Marui Pro Sight).

Internally, the gun operates from Marui's latest gas system and has the same style of hop up setting we know.

The pistol has 29 bb's in its magazine and includes interchangeable rear grips for better grip and better comfort for the shooter.