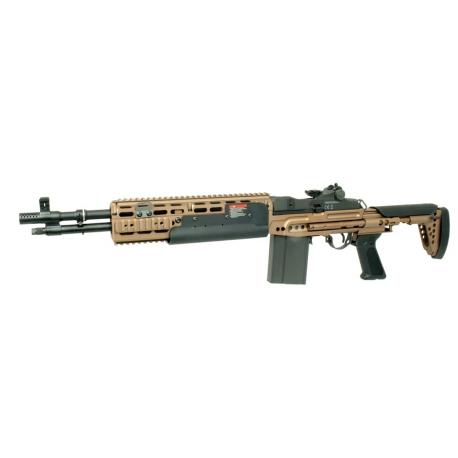 By buying this product you can collect up to 49 points . Your cart will total 49 points that can be converted into a voucher of 12,25 € .

For the little story :

Springfield Armory: The M14 rifle was the first assault rifle of the US Army, which adopted it in 1957 to replace the M1 Garand and the M1 rifle.

Its mass production started in 1958 and more than one million three hundred thousand M14 were distributed to the American forces between 1959 and 1964.

Here represented in an Airsoft electric version by G&G.

The replica is distinguished from others by its Bronze and Black color.

The body of the replica is made of aluminum and it has an aluminum flash hider.

Its outer barrel is made of black aluminum.

The hand guard is decorated with a housing for the battery and an ABS cover covers it which makes it pleasant to grip.
It is also decorated with a picatinny rail on the 4 sides to add accessories such as a laser, PEQ, Red Dot or a flashlight.

The front sight is fixed and the rear sight is adjustable in drift and elevation.

A stop slide lever is also functional allowing it to be blocked to more easily adjust your Hop-up.

It has an ambidextrous sling attachment at the stock and another on the handguard that you can move to the left and to the right but also on the length of the handguard.

Its metal magazine has a capacity of 470 bbs.

The stock has a cheek support in black ABS adjustable via the lever on the right of the stock and is embellished with a Recoil PAD rubber for better comfort.

The battery connector is in Tamiya Large, but a converter from Tamiya to mini Tamiya is included.

The battery compartment allows you to place batteries with large width like the 8.4V 3000Mah or 7.4V 3300Mah