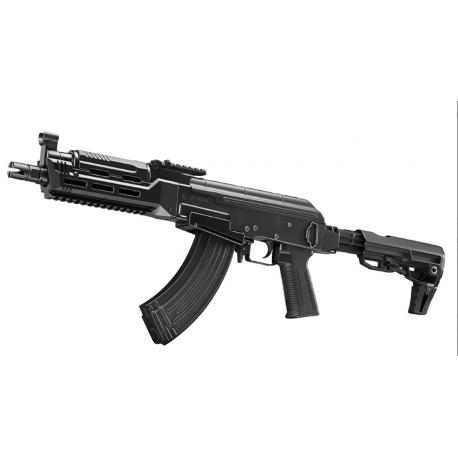 By buying this product you can collect up to 50 points . Your cart will total 50 points that can be converted into a voucher of 12,50 € .

Next generation "AK Storm" is a replica with modernized customization made by Tokyo Marui of the original AK47.

Personalized parts that improve operability, such as a short barrel which is easy to handle, a stock which can select the shape according to the situation, a Magwell allowing a change of magazine easily, a mounting base for micro Pro Sight and various small options.

Equipped with a Version NEXT GEN type 3 gearbox.

Recoil-shock function, providing recoil transmitted throughout the replica with each shot.

An automatic fire stop system when the magazine is empty.

It is a model that pursues the reality of operation and operability.

Realistic rearming system when you insert a new full magazine into the replica, by a rearming movement on the charging handle.

The assembly of the replica is made of part made by die-casting in pressed steel to create a more realistic feeling when it is in motion but also a feeling of weight when it is taken in hand, the whole constituting a large rigidity.

The two sides of the handguard adopt the M-Lok rail system and a picatinny rail is on the lower part.

The M-Lok system which allows you to add rails only where necessary, keeping the handguard slim and easy to handle.

the 20 mm wide M-LOK rail (Picatinny standard) is delivered with one of the three types of slots: 3 slots, 5 slots and 7 slots.

It can be easily removed with the enclosed hex key.

The replica is delivered with two types of M-LOK protection, two types of hand stops in picatinny fixing and a special support which can be used to fix the optional Micro Pro Site in a lower position and adapter for NEXT GEN Standard magazine.

If you remove the flame hider, you can optionally install a silencer, Tracer, flash suppressor, with a counterclockwise thread of 14 mm.

Includes a 90 bb's magazine and an outer steel case similar to the real one.

ATTENTION to operate with the Bolt catch you must buy a NEXT GEN TYPE 3 magazine. (Stop shooting function at the end of the magazine)

If you want to use standard NEXT GEN magazines, you will have to use the adapter supplied with the replica (but the shooting stop at the end of the magazine will not work).