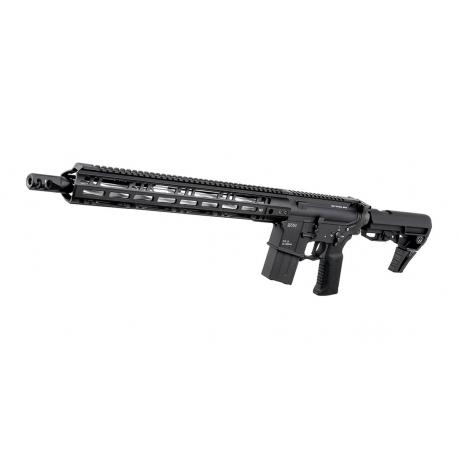 By buying this product you can collect up to 64 points . Your cart will total 64 points that can be converted into a voucher of 16,00 € .

The MTR16 represents the latest design from Tokyo Marui, breaking away from their traditional "military" or "standard" G.I. rifles.

With modern accessories like an M-LOK compatible rail system, a slightly more vertical pistol grip and a minimalist design, the MTR16 looks more like what is usually seen on civilian AR15s.

As a finishing touch, the body of the replica is made of cerakote, which gives it additional scratch resistance and durability.

The MTR16 uses the MWS ZET system as seen in the GBBR range.

Its M-Lok handguard comes with 3 picatinny rails of 3 slots, 5 slots and 7 slots.

It has a lightened and twisted silver barrel with a length of 16 " with a 14mm CCW thread. (Counterclockwise)

In addition, this replica will delight left-handed users, because it is full ambidextrous: charging handle, fire selector, magazine release and bolt catch.

The pistol grip takes an upright position, which makes it easier to grasp it even when the stock is in the short position.

It does not have a sight, Marui recommends the use of an optical sight such as RED DOT, Scope ....

Are magazine is a short version in die-cast aluminum accepting 20 bb's.

Magazine in die-cast aluminum has a high thermal conductivity, which facilitates heating after gas injection and between shots.

The magazines of the M4 MWS are compatible and have a capacity of 35 balls.