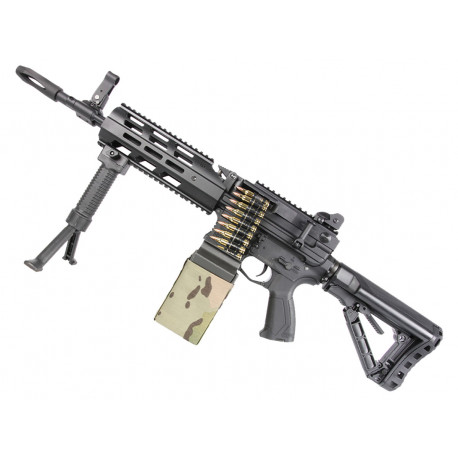 If you want to save you customization, you have to be a registrered user

By buying this product you can collect up to 39 points . Your cart will total 39 points that can be converted into a voucher of 9,75 € .

The LMG (Light Machine Gun) replica from G&G is part of the CM16 range.

It has an aggressive look thanks to its ammunition band, its camouflaged drum box (multicam) and its super long flash hider, while keeping a very light weight.

Despite its role as a support weapon, G&G equipped with a Mosfet ETU, allowing a firing function in Semi / Burst / Full.

Like the CM16 range, you only need to press the trigger for 10 seconds and the mosfet goes into SEMI / BURST mode, doing the opposite operation to return to SEMI / FULL.

If you disconnect the battery, the replica goes back to the factory mode (SEMI / FULL)

The replica comes with a cartridge band for a more realistic effect.

The folding arming lever allows the opening of the Dust Cover to make your HOP UP setting.

Its stock is expandable in 5 positions as on an M4.

It comes with a grip grip with the Bipod function.

Its Drum Box magazine has a capacity of 2500 beads and is compatible on replicas of type M4 / HK416 and Scar-L
It must be powered by 2 CR123A battery and it can support a rate of fire greater than 20 seconds.

A replica that will delight fans of typical role Juggernaut (Mastodonte)

The replica can be used with 7.4V and 11.1V Lipo batteries.
Available in Dark Earth or Black Color ( see Drop-Down menu )